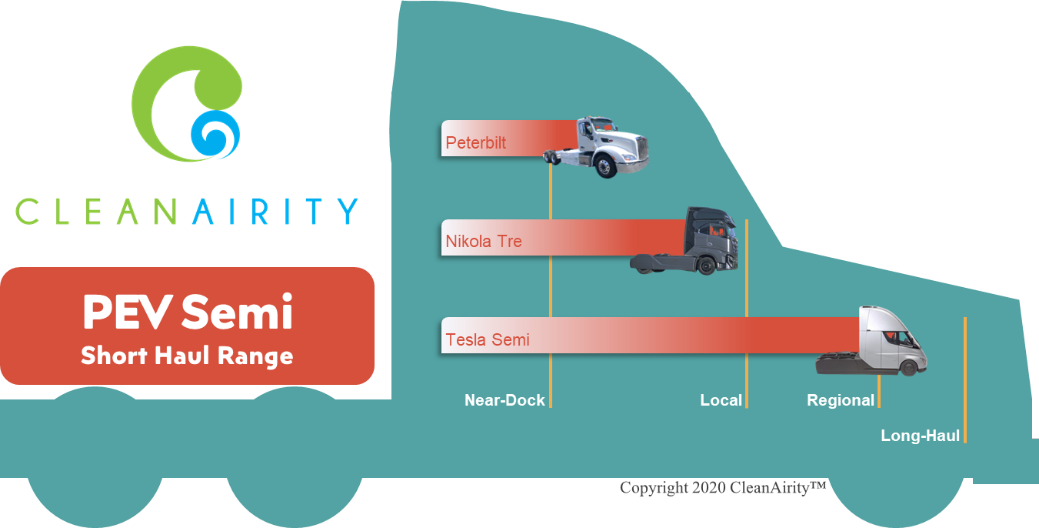 Find Out Why People are Lining up to buy The Tesla Semi, Nikola Tre and Peterbilt Model 579EV and What They Don’t Want You to Know.

With Nikola being talked about as the next Tesla and both planning products in the same space, its time see how the trucks stack up and which rig pulls out in front!

Battery electric heavy-duty trucks are nothing new, they have been around for more than ten years, but none have reached volume production until the promise of these three stunners. The dream is zero-emissions and low fuel cost with no compromises. A well-suited traction motor and an optimal solution to the cost/range/weight battery trade-off have left the heavy-duty tractor manufacturers on the sidelines of the EV revolution

until now. With the brunt of the work being accomplished by small and smaller start-ups, a tipping point has been reached. OEM’s and suppliers alike see a game of musical chairs is in full swing. The winners moving into a better revenue position as traditional supply dividing lines are redrawn, and everyone (mostly North America) is eyeing a large bite of Cummins’ piece of the pie. Cummins themselves is not betting on the past either. They have started to electrify auxiliary systems to give the diesel engine a better chance to minimise emissions. This work has advanced powertrain electrification and sees Cummins acquiring a Canadian fuel cell provider and partnering with two others. Tier one suppliers Bosch, Dana and Meritor have purchased electric tractor motor manufacturers. “It’s the most movement we’ve seen in the industry in decades”, an insider shared with us. This marks the beginning of the end of dirty diesels. 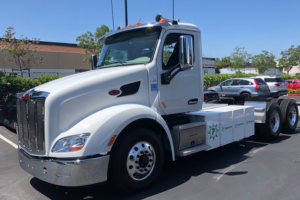 Peterbilt has a reputation for building dependable and high-quality tractors. PACCAR, Peterbilt’s parent company, continually utilises new technology in their product lines in areas such as advanced manufacturing, fuel economy, safety and maintenance. Primary work is presently underway in autonomous vehicles as well as investigations into electric and hydrogen fuel cell powertrains. However, alternative powertrain demonstrator tractors have been designed and built by partners. TransPower, a San Diego based start-up, who has recently been acquired by tier 1 supplier Meritor, built the model 579EV pre-production tractors. When ex-staffers from ISE Corp, a hybrid transit bus manufacture, founded TransPower, they were permitted to bring the basis of TransPower’s powertrain design with them. Since that time, they have built many dozens of trucks from class 8 tractors to school buses. Meritor will produce the current PACCAR line-up of EV utilising its e-axle technology, Blue Horizon. 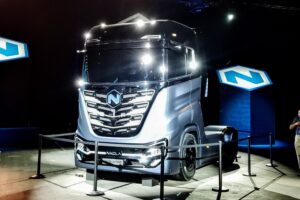 Nikola Motors jumped publicly into the heavy-duty truck space in 2016 with the reveal of the eponymous Nikola One fuel cell/battery hybrid semi. Despite new partnerships with Bosch Powertrain Solutions and CNH Industrial (Iveco Trucks), Nikola has shifted its priority to first producing the all-electric Tre. Some would say this move is as a result of Swedish fuel cell fledgeling company PowerCell turning down Nikola to be the fuel cell supplier due to “totally unacceptable business terms”. Nikola announcement that they are “going in a different direction with our fuel cell stack” is explained by their recent hiring of a handful of fuel cell academics. We don’t expect to see an in-house developed fuel cell engine for 3-5 years.

Besides, Bosch wants this tractor. It will be made and operated in their backyard along with being built with Bosch’s supply chain with easy access to the learnings. Don’t expect Bosch to be a long-term partner as they have their plans for market domination. The Tre is targeting the European market and will utilise an Iveco S-Way glider, Bosch’s e-axle and world-beating batteries.

Nikola Motors is wrapped in controversy, much of their own doing, none of which seems to have an end in sight. Marketing or hate, you can decide. 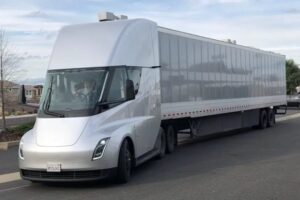 Since 2016, Tesla has been developing the Semi. A new tractor takes thousands of hours of testing, design iterations and manufacturing improvements before they are validated as ‘ready for production’. Although Tesla had delayed the Semi production date, they have now acknowledged (10 June 2020) the Semi is ready for production. Assembly will likely take place in the Nevada Giga Factory, eliminating some transportation cost with suppliers delivering most of the parts. If Tesla is clever, it will use the validated Model 3 battery production line. The traction motors are from the Model 3 and include a unique gearbox, pragmatically using existing components, thereby avoiding R&D cost and reducing time to market. A smart approach!

Here are the Specs.

We have assembled the specifications from each of manufacturer’s website, vested party press releases, publicity events, and interviews. Numbers in red have been determined by us through our analysis and may be wrong if our assumptions were false. For easy comparison, we have provided both metric and imperial units. 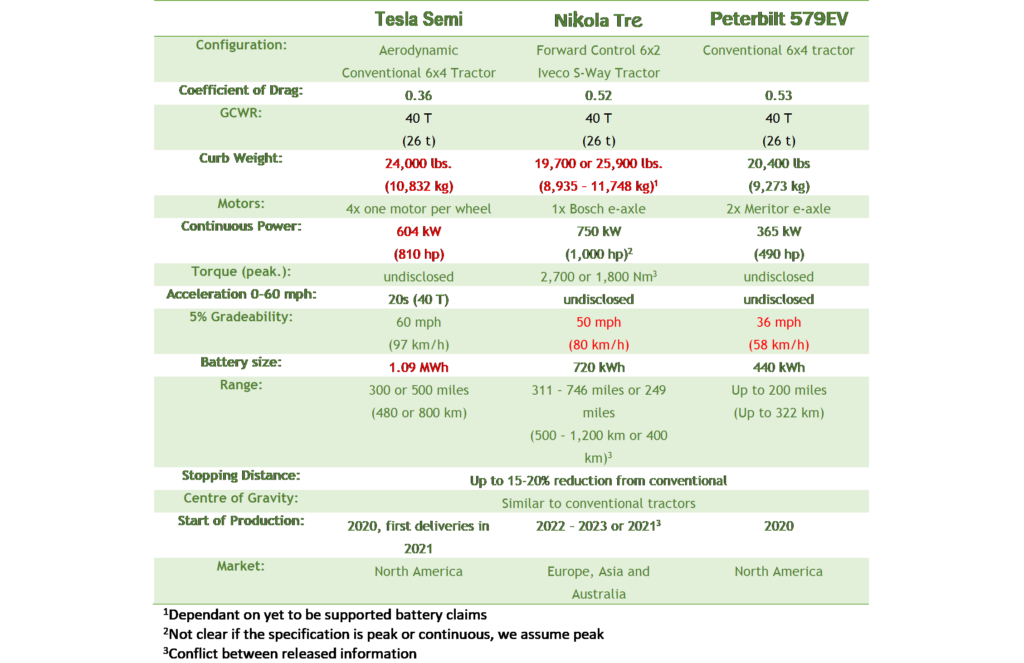 Designing Trucks is a Drag 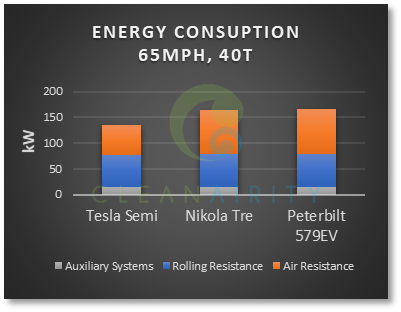 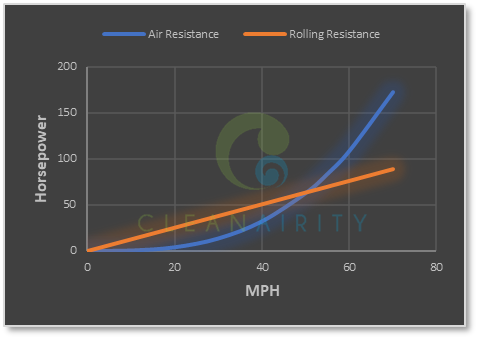 Air resistance increases exponentially as speed increases, or the faster you drive, the energy used increases steeply. The Tesla Semi drag coefficient is 30% less than both the Iveco S-Way and the Peterbilt model 579 tractors. This means the Tesla Semi requires less energy to move the same weight at the same speed over the same distance, which means more efficient energy use and a smaller battery! A smaller battery has a ripple effect of reducing tractor weight, helps keep the weight lower to the ground (where the batteries are placed effects stability) and allows more space for other components. Reduced drag is not on the table for Nikola or Peterbilt since they plan to use existing tractors. However, add-ons such as wind deflectors, side skirts, hub caps and side view cameras could be combined with trailer close coupling by all parties to reduce overall drag. Use of trailer tails on a large scale have been discounted as impractical even though they help to minimise drag.

A key differentiator in an electric vehicle is the battery size and how the vehicle uses that energy determines the range. 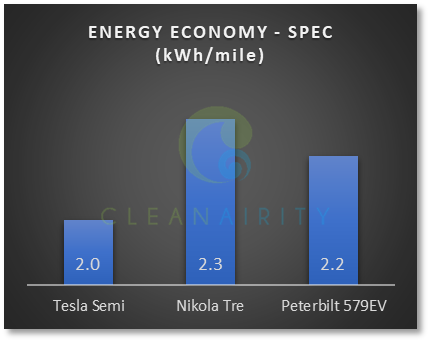 In all cases, we assumed a tractor configured with the largest of the battery sizes specified. While Nikola and Peterbilt have specified battery sizes of 720 and 440 kWh, respectively, Tesla has not specified a battery size.  Consequently, we have assumed that the Semi would have at least a 1,000 kWh battery pack to achieve the indicated range which we (and others) have determined using multiple methods. Battery size divided by range will give the energy economy in kWh per mile. The Semi has specified the energy economy will be less than 2 kWh/mile which implies the range will be better than specified.

All three manufactures are claiming some improvement in stopping. For example, Nikola specifies, the Tre “stops faster”. A driver will tell you that if they stop the truck faster, then the cargo will be damaged. So, is this something no one wants or needs? Most electric vehicles have some amount of regenerative braking. This braking happens when the wheels turn the motor generating power instead of the opposite such as while coasting. Most of this energy is used to charge the battery, but some energy is lost as heat. Regenerative braking stops the vehicle faster not by braking harder but by starting to brake when the driver removes their foot from the accelerator pedal and before the brake pedal is depressed. Stopping time is made up of three parts: perception (I need to brake), reaction (the time it takes to start to brake) and braking time (vehicle and speed dependant). Subject to the amount of regenerative braking chosen by the manufacturer, regenerative braking can typically reduce the reaction time by 15 – 20%. The manufacturers may include some sort of active accident avoidance system that should reduce perception time as well.

Having a more powerful diesel engine is handy for climbing hills at speed as opposed to crawling. Typically, the more powerful the engine, the better the gradeability. Both Tesla and Nikola have specified a 0-60 mph time but how much power is enough? It’s frightening to imagine an 80,000 lbs. truck could be launching at you three times faster than a diesel truck but still requiring two times the stopping distance of a passenger vehicle. Moreover, excessive acceleration causes poor fuel economy, which means a reduced range. The manufacture can control acceleration like the way they govern vehicle speed.

All three companies are targeting short to medium-haul routes from container ports and their connected hub-spoke networks. These routes are predictable and generally service a handful of known depots.

The combined port of Los Angeles and Long Beach is the largest container port in North America and as of 2018, the 9th largest container mover in the world. They have carried out extensive work to understand and reduce their emission profile, which enables us to use their drayage drive cycles as our virtual proving ground.

They have grouped the drive cycles into categories ranging from about a ½ mile to 55 km round trip. We also used maximum container weight the ports specify and a loaded truck for the entire turn. Leveraging this data, we have used Monte Carlo sampling to determine the typical and worst-case energy consumption and have forecasted an expected range for the three truck.

“all three truck was between 20-25% lower than specified” 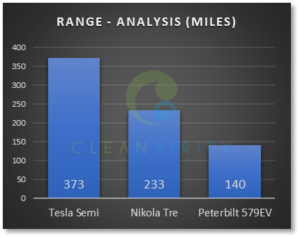 Assuming the Tesla Semi will have a 1,000 kWh battery, it will be suitable for the worst case of container deliveries. The Peterbilt model 579EV will need to charge mid-shift 40% of the time or end the day early, while the Nikola Tre will need to charge 7% of the time and the Tesla Semi will not need to charge mid-shift.  However, if any of the three trucks were used for one and a half or two shifts a day, each would need to recharge at least one time during the working day.

Intriguingly, the analysis showed that the range of all three truck was between 20-25% lower than specified. Before anyone starts an investigation – unlike passenger vehicles, there are no set fuel economy drive cycles for heavy-duty trucks; therefore, these range specifications will likely be under ideal condition (flat ground). More importantly, it seems that all three manufacturers are using similar methodologies.

Before we are labelled part of the Tesla legion, we did notice that The Semi’s energy economy was not less than 2 kWh/mile, but instead 2.9 kWh/mile, but this, of course, parallels the 25% discount in the specified range. 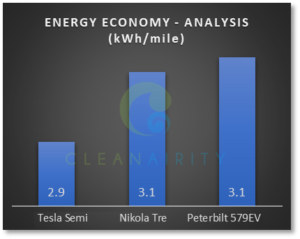 It has been suggested that for a battery truck to pull a combined load of 80,000 lbs., the tractor would have to weigh over 30,000 lbs. A conventional short-haul “day-cab” tractor typically weighs less than 16,000 lbs., where North American long-hail tractors with 230” custom sleepers can weigh as much as 22,000 lbs. All three tractors with the maximum specific battery size do not exceed the North American 80,000 lbs. (36 t) the weight limit for a Class-8 truck when hauling containers. Nikola made a press release that their battery technology is 40% the weight and twice the density of the Tesla (Model 3) batteries which we have used in our analysis. However, if this battery technology is not ready for the Tre production, then a tractor using more conventional batteries is expected to weigh more than a ton over the Class 8 truck weight limit. 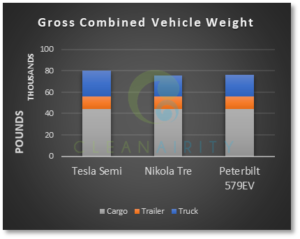 And the Winner is?

After careful research into the electric motors, battery technology and tractor configurations along with analysis of the practical use of Tesla Semi, Nikola Tre and Peterbilt model 579EV, we have found a clear winner. Enabled by the highest driveline efficiency, leading in production battery technology and a world-beating aerodynamic design The Tesla Semi is the clear winner. Moreover, The Semi is within the class-8 weight limit and will give the single shift operators a viable zero-emission option. However, these three tractors, and EV commercial trucks in general, suffer from two key challenges: lost productivity while charging and the high capital cost to build a massive scale recharge centre. Although Tesla and Nikola have plans to address these challenges, the practicality of such a station and the cost of local infrastructure upgrades have yet to be shared. 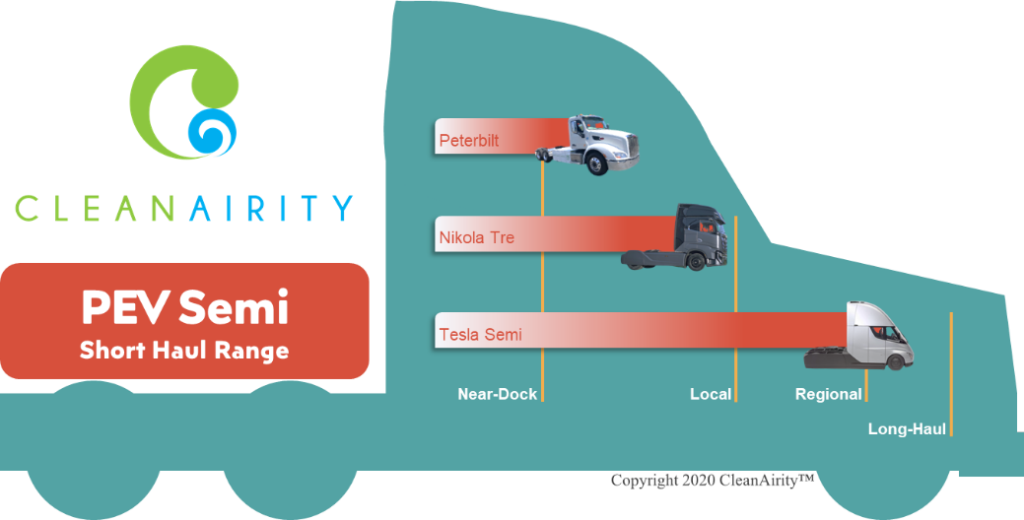